Best Ukulele Players of All Time

A pro ukulele player shares the best ukulele players of all time including famous and less known musicians from around the world.

Today, I’m here to talk about the best ukulele players of all time. With only room for ten players on this list, I’m going to have to make some hard cuts, but all of the players included here are objectively great players and ambassadors of the instrument.

The ukulele is one of the fantastic musical exports from the island of Hawaii, along with the slack key guitar/slide guitar, which both took the continental US by storm in the 1920s. Nowadays there’s a lot of great and diverse music you can find on the ukulele.

My name is Ryan Burns. I’m a ukulele player, multi-instrumentalist, and songwriter from Chicago, Illinois, who has been playing ukulele and teaching for over 10 years. I received a degree in music from the University of Illinois and am currently part of multiple bands, including Distant Brothers and Ryan Burns & The Vocal Ghosts.

What Makes a Great Ukulele Player?

The ukulele is an instrument that has its roots in Portugal. It was brought by immigrants to Hawaii in the 19th century, eventually becoming a part of the musical landscape. During the Hawaiian culture craze in the US in the early 20th century, it was exported to the mainland.

Great ukulele players come in many varieties, from virtuosic talents who combine many diverse techniques to wow audiences or singer-songwriters who pair their voices effortlessly with the sweet tones of this diminutive instrument.

The players on this list come from a few different genres, but the main ones you’ll see are traditional Hawaiian players, progressive virtuosic players, pop/folk songwriters, and novelty players. Of course these genres cross over from time to time, too.

Here is my list of who I believe are the best ukulele players of all time. There were some hard choices to make, especially near the end of the list, but I believe these 10 have the greatest skill and highest cultural impact out there.

The Japanese-American Jake Shimabukuro shot into stardom after a video of him playing The Beatles song While My Guitar Gently Weeps on the ukulele in Central Park went viral. He was quickly requested on TV, on recordings, and by other great musicians including Bela Fleck, Yo-Yo Ma, and Jimmy Buffet.

After his rise to fame, he continued to play his amazingly virtuosic style of ukulele on several studio albums and media appearances. He has been referred to as the Hendrix of the ukulele (quite accurately I might add).

Long a mainstay of the Hawaiian music community, Israel Kamakawiwo’ole didn’t reach mainstream success until his cover of Over the Rainbow was used in a toy commercial in 1999. After that, his music was used in countless pieces of media and his voice and music were instantly recognizable.

Along with his music, Iz holds a special place in Hawaiian culture, not only because of his wonderful music, but also because of his advocacy for native Hawaiian rights. He received many awards, both in his lifetime and posthumously, and was dubbed the “Voice of Hawaii” by NPR.

Eddie Kamae was one of the leading voices of the Hawaiian cultural revival in the middle of the 20th century, both as a musician and filmmaker. He taught himself the ukulele by listening to the radio and developed several innovative techniques to play the melody and harmony together.

He joined with slack key guitar player Gabby Pahinui to form the band Sons of Hawaii and taught several of the great players of the next generation, including Herb Ohta Sr.

Cliff Edwards, also known as Ukulele Ike, was a vaudeville and film musician and actor from the early 20th century. His comedic style, diverse vocal talents, and slick ukulele playing brought him opportunities throughout many facets of show business.

He’s perhaps most famous for his voice acting work in many Disney movies, especially as Jiminy Cricket in Pinocchio. But he made his career playing and singing with his Martin ukulele and singing novelty versions of pop and jazz standards on stage and in recordings.

Known as Ohta-san in Hawaii and throughout Asia, Herb Ohta Sr. was a ukulele virtuoso who gained his first hit with the song called Sushi in 1965. He was a popular and sought after player in Hawaii before that, but gained international fame after this mix of Hawaiian music and popular jazz.

His son, Herb Ohta Jr., is a talented and popular ukulele player in his own right, sought after for his playing and teaching online.

George Formby was primarily known as a film and stage actor in the 1930s and 40s, for his comedic songs, and, of course, for his virtuosic ukulele playing. Though seemingly effortless, Formby’s strumming technique is unmatched before or since.

Though he didn’t release many albums as a musician, his music appeared frequently on screen and stage at the time. He was considered one of the most popular talents during his time in England.

Ingrid Michaelson is a folky-pop singer-songwriter from New York who’s primarily known for her gorgeous voice pairing with simple ukulele backing. With her album Girls and Boys, she shot into stardom, bringing the ukulele with her.

After her rise to prominence, the ukulele gained a new resurgence in pop music both because of her influence and the way the sound pairs with many players’ voices.

A virtuosic Hawaiian player, Daniel Ho studied music composition in college and has since made his name as a record producer, player, and composer. He’s received Grammy nominations for his production, compositions, and playing.

His most recognized recording is his album Ikena, a collaboration with actress and singer Tia Carerra. He’s also featured as a producer, singer, and player in the movie Forgetting Sarah Marshall.

Raised in Hawaii, Jack Johnson brings much of the laid-back island vibe of his upbringing to his music, including often using the ukulele. Along with Ingrid Michaelson, his rise to fame with his 2005 album In Between Dreams helped to bring the ukulele another wave of prominence in pop music.

A vaudeville string instrument virtuoso, Roy Smeck was known by his nickname, The Wizard of the Strings. He wasn’t a great singer and so he developed several virtuosic and showboating techniques to perform on stage and film as a vaudeville performer.

Equally virtuosic at guitar, ukulele, and banjo, he was a much sought after performer in the mid 20th century, but fell out of favor as his style of novelty playing lost popularity.

The ukulele fits wonderfully in many genres of music and can add a sweet and round texture to accompany almost any song that includes a guitar. 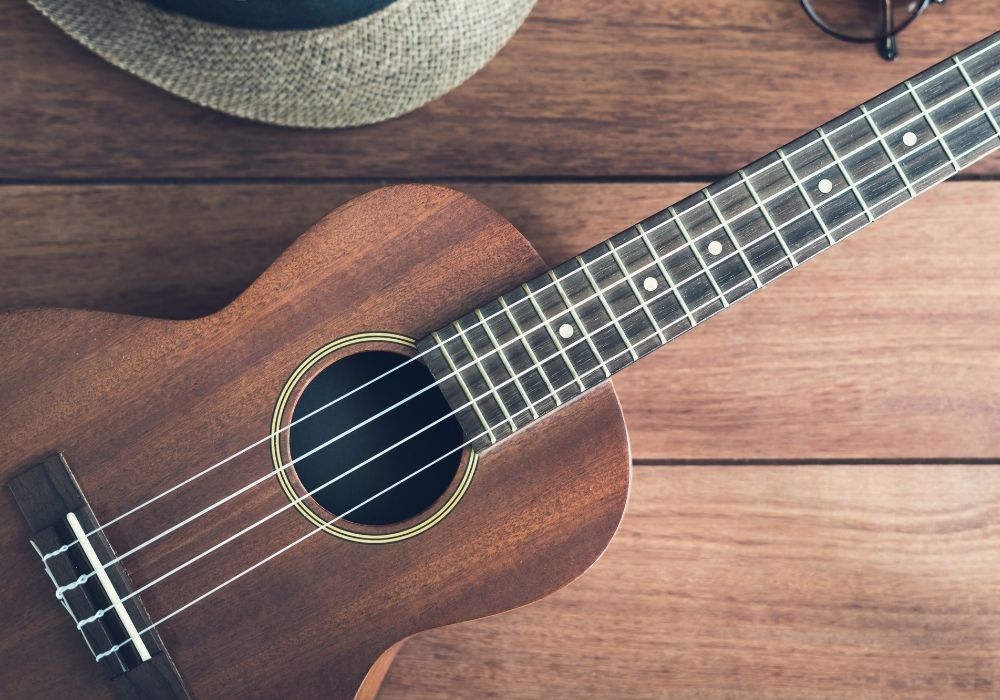 But, there are a few genres where the ukulele is very prominently featured. These are listed below.

Of course, any list of styles of ukulele music has to start with traditional Hawaiian music. It’s not only culturally important and impactful, but often features some of the most interesting and virtuosic playing (which led to the name of the ukulele, translated as “jumping flea”).

For the past 100 years, the ukulele has been used in popular music as a way to play delicate and vulnerable songs as a counterpoint to some of the louder and more bombastic songs in the genre. You can hear modern examples from 21 Pilots, Vance Joy, and Jason Mraz.

This is a genre that was especially popular in the early 20th century and still has plenty of appeal (see Garfunkel and Oates). In this genre, the ukulele is used to highlight the silly or absurd lyrics while still providing jaunty melodies and harmonies.

In the last 20 or 30 years, the ukulele has been increasingly used to produce interesting cover song recordings and videos. These can be virtuosic, as seen from Jake Shimabukuro, or simple and quiet pop music covers, which you can find all over Youtube.

Ever since the folk revival of the 1960s, the ukulele has been used by folk musicians to accompany singer-songwriters on their sweetest songs. From Mama Cass to Nickel Creek, some of the best folk singers use the instrument to bring a different texture to their music.

There are countless ukulele songs that could make up the top three ukulele songs, but I chose these three for their historical significance, cultural impact, and sheer virtuosity. 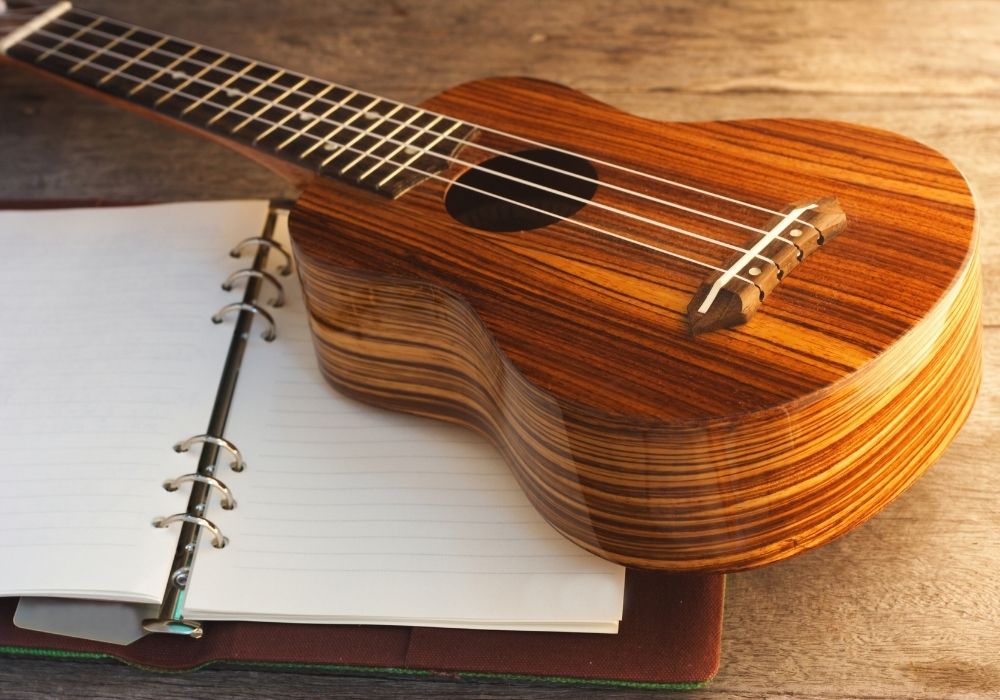 If there is one song that encapsulates how deeply ingrained the ukulele became in such a short period of time, it’s the classic Hawaiian song Aloha Oe. Not only is it a fantastic song, but it was actually written by the ruler of Hawaii at the time, Queen Liliuokalani.

Somewhere Over the Rainbow

Though virtually unknown for 10 years after the song’s recording, Israel Kamakawiwo’ole took the world by storm when his classic version of Somewhere Over the Rainbow (and It’s a Wonderful World) was used in several high profile films, TV shows, and commercials.

While My Guitar Gently Weeps

Though many virtuosic players played the ukulele earlier in the 20th century, Jake Shimabukuro brought the possibilities of what could be played on the uke to the forefront with his cover of While My Guitar Gently Weeps. With his unbelievable mastery of technique and electric energy, he brought the ukulele to a whole new audience.

Though often overlooked for its diminutive size and use in novelty songs for many years, the ukulele is a truly great and unique instrument that deserves a place in fun, silly, and serious music. I had a lot of fun researching and listening to these, some of the best ukulele players of all time.

I hope you learned some new facts about the ukulele and maybe listened to some great ukulele players for the first time with this article. Please take a look at the rest of the content on this site to learn more about ukuleles and other string instruments.

If you have any questions, comments, or suggestions for who you think should be included on this list, please feel free to leave a comment below. Thanks!