Best Banjo Players of All Time

A professional banjo player and banjo music producer shares the best banjo players of all time as well as specific songs and styles.

In this article, I want to give you my opinion about the best banjo players of all different styles. On the list, there are players who are currently playing as well as pickers from the past.

My name’s Ryan Burns. I’m a banjo player and songwriter from Chicago, Illinois, who’s been teaching and playing banjo for 10 years. I received a degree in Ethnomusicology from the University of Illinois, attended Bela Fleck’s Blue Ridge Banjo Camp, and studied under Greg Cahill.

The banjo draws me in because of its unique and penetrating sound. It’s an instrument that cannot be mistaken, and as a relatively young instrument (though with old roots), it’s still growing and evolving.

What Makes a Great Banjo Player?

Great banjo players should have a combination of technical prowess and cultural impact. The style of their playing doesn’t matter, and many of those I consider the greatest players have brought something new to the instrument.

On top of the absolute top technical players, it’s important to understand what the players have done to move music itself forward. Many of the best on the list changed the game not only in the banjo world but in their entire genre of music. 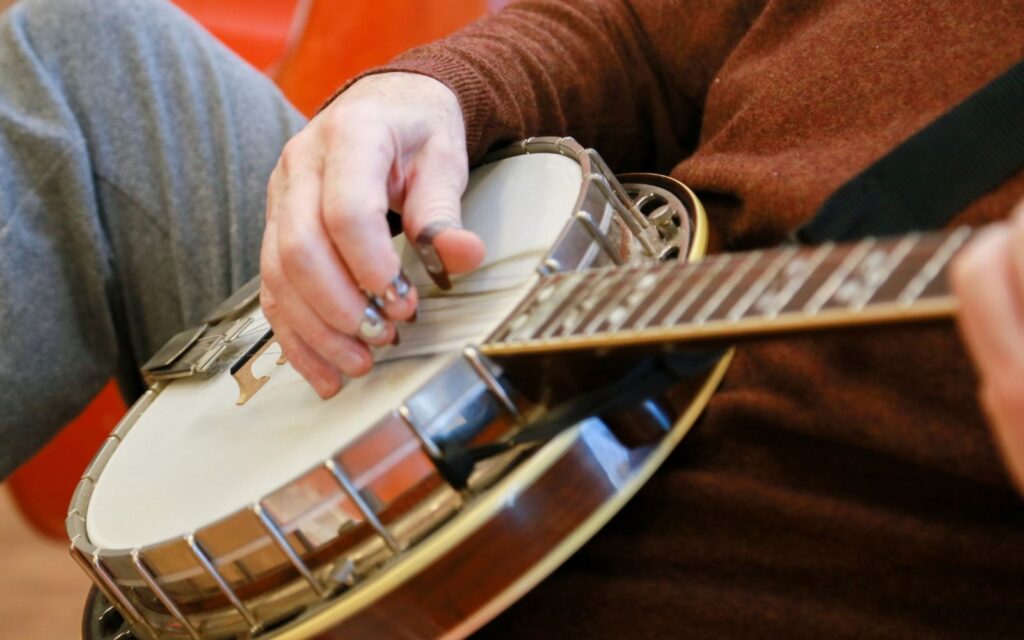 It’s impossible to list great players without leaving some out or accounting for my own taste, but with these criteria it’s easy to find a list of very important players for musicians everywhere.

The majority of these ten players below are bluegrass-style players who play the three-finger style of bluegrass banjo. This is the most dominant style of banjo, so it’s also where many of the greats gravitate to. I picked these players for their combination of technical mastery and cultural significance.

Earl Scruggs is the banjo player that you hear in your head when you think of the banjo. When he came onto the scene in the 1940s, he completely changed the way banjo was played.

He took many styles of music and banjo playing and synthesized them into a unique sound that people are still trying to match today. There are few instrumentalists who can really be said to define an instrument, but Earl Scruggs is definitely one of them.

When Bela Fleck came onto the scene in the 1970s, he was influenced by other progressive banjo players of the time like Tony Trischka (his teacher). But throughout the decade and up until the current day he redefined what banjo and bluegrass music could be.

With his bands Newgrass Revival and the Flecktones, he took banjo into funk, rock, jazz, classical, and all kinds of different genres. He took the techniques that Scruggs created and added to them with exciting single string techniques.

Rhiannon Giddens is a fantastic banjo player with an amazing voice and the ability to write and interpret songs. Even without anything else, she would be in strong consideration for making it on this list.

But the other reason she is so important to the banjo is that she’s an integral member of a group of black musicians who are recreating string band music from America’s South. She brings her incredible talent and a lot of heart to this music that’s so important for the cultural history of America.

There were many banjo players in the generation after Earl Scruggs who took his style of playing banjo and moved it forward. JD Crowe is one of the best examples of this generation. He played traditional bluegrass as well as anyone, but also began the trend toward progressive playing.

JD had a powerful and clean style that’s instantly recognizable. He moved the style of bluegrass banjo forward with his technically immaculate style.

Throughout the middle of the 20th century, folk musicians were an important part of political movements for civil rights and peace. Pete Seeger was at the center of this and was even banned from television and radio during much of the ’60s and ’70s.

Though he was a great player with a unique style that borrowed from clawhammer and bluegrass, he’s most known for his simple but effective songwriting and interpretations of American folk songs. His recordings and writings also influenced countless players after him.

One of the lesser-known players outside of banjo circles on this list, Allison Brown is one of the leading modern banjo players in the world. Originally a finance banker educated at Harvard, she transitioned over to playing banjo full time and founded Compass Records.

She combines traditional Scruggs-like styles with progressive jazz-inspired melodic playing that pushes the envelope of the instrument, much like Bela Fleck.

Noam Pikelny is a banjo player from the suburbs of Chicago. After joining Chris Thile’s progressive bluegrass supergroup Punch Brothers, he became the leading banjo player of his generation. His technical prowess and creativity on the instrument is unparalleled.

His style is heavily influenced by Bela Fleck, and he’s equally comfortable playing Scruggs-style tunes or fiddle melodies. He has many innovative chord and scale theories which have pushed banjo playing forward into a new era.

There were few other musicians or banjo players similar to John Hartford, a banjo and fiddle player prominent in the 1970s. He played many genres of music and is known both for his bluegrass and old time playing.

Kristin Scott Benson is the premiere Scruggs-style banjo player of her era. Though soft-spoken and extremely humble, she can pick a tune as well as anyone else and has 4 IBMA awards for best banjo player to prove it. She has an unmatched sense of drive, rhythm, and bluegrass feel.

Not only is KSB one of the best players around, but she’s also a highly sought-after teacher for one-on-one lessons or for camps and workshops. Her knowledge of technique and her specific style really help her to shine.

He’s not just one of the most popular comedians of all time, but also an innovator and paragon for banjo music. He’s a fantastic player who started playing even before exploring comedy and is able to play in clawhammer and bluegrass styles at an extremely high level.

He also presents a yearly award called the Steve Martin award to some of the best upcoming banjo players in the scene today. He’s a great player and a champion of the instrument for the world.

Though the most prominent music that banjo is used in is bluegrass and old time, banjo is also used in various musical styles, from jazz to Irish to classical music. 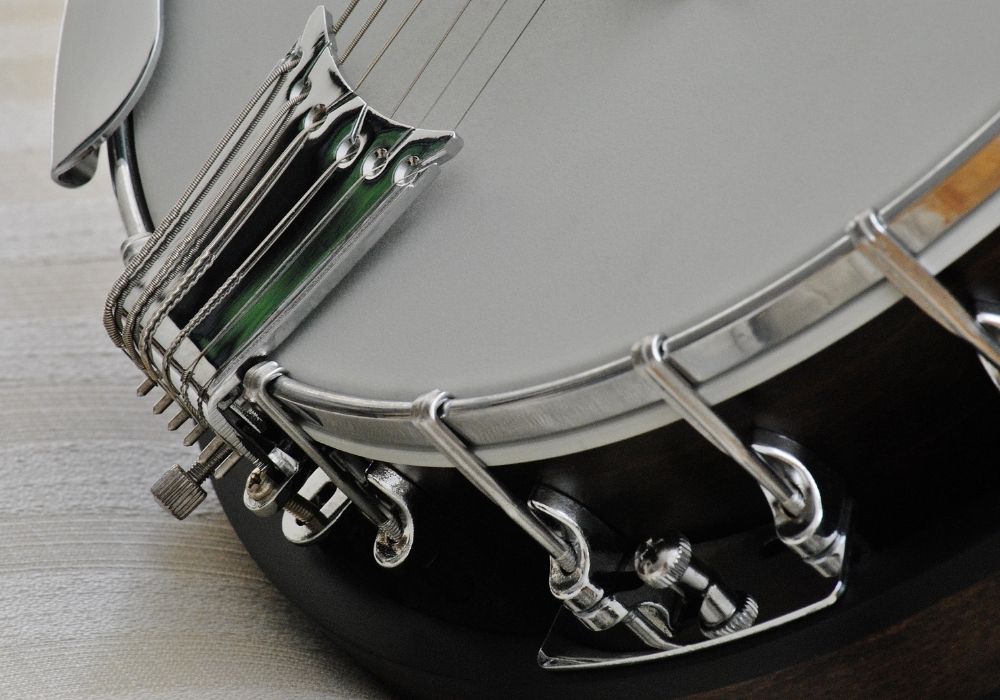 Bluegrass music is a uniquely American style of music known for its fast, virtuosic playing, tight harmonies, and traded solos. The banjo is played with a three-finger rolling style that accentuates the twangy speed of the banjo.

The unique blend of cultures in the slave plantations of the American South created most American music as we know it now, and that started with old time music. Clawhammer is the style used for this style of music and can be traced directly to African techniques.

Banjo played in the bluegrass style is often used to accentuate modern country music with its twang and drive.

During the creation of jazz music in the American South, the banjo was one of the most popular instruments in the country because it was loud enough to play with other loud instruments. Traditional ragtime is played with a 4-string tenor banjo, and modern 5-string players have started to play jazz too.

In the early 20th century, the banjo migrated across the Atlantic to Ireland and was incorporated into Irish folk music, similar to the mandolin. Generally, a plectrum 4-string banjo is used, but sometimes tenor or 5-strings are also used.

When banjo was brought into widespread use in the 19th century, it was also used in classical music, both written specifically for banjo and adapted from other instruments. This style of music can be played on many different kinds of instruments, but often is played on vintage style banjos.

It’s hard to narrow down banjo music to just three songs, but there are a few banjo songs that rise above the rest because of how iconic and undeniably great they are. Take a look at these three examples and then go check out my article the 10 Best Banjo Songs.

Used as the theme song to the movie Bonnie and Clyde, this recording isn’t only an undeniably great tune from Flatt and Scruggs, but also was one of the reasons many banjo players took up the instrument when the movie came out.

This song by the Punch Brothers encompasses incredible Scruggs-style playing, progressive techniques, and an undeniable groove from the band that includes the vanguard of banjo music now, Noam Pikelny. It’s one of my favorite songs to see played live.

It’s a song by Bill Keith, who was one of the more important and progressive banjo players in the 1960s and 70s, bringing melodic banjo playing to the forefront. Keith’s entire album “Something Auld…” set the stage for big changes in bluegrass music and is a joy to listen to.

A list of 10 players will never be enough to cover all of the wonderful banjo players of any era, let alone of all time. But these 10 are some of the best and most influential to ever pick up this unique instrument and are certainly 10 of my favorites.

If you liked this article, go and dig into these banjo players’ music and follow along with our other articles about great banjo music and great banjos. Though often not explored, the banjo has a rich and interesting history that you can dig into for years.

Feel free to leave a comment below if you have any favorite players that didn’t make this list or songs you like to hear from these players. I hope you have a wonderful day, and thanks for reading!