Easy Songs for Acoustic Guitar (Plus Chords & How to Play)

This guide to easy songs for acoustic guitar will help you play some simple songs. All you need to know are some basic guitar chords. None of these songs are all that difficult, and you should be playing them right away.

I’ve been playing both electric and acoustic guitar for many years. The following songs were some of my favorites to play when I was learning.

Make sure you play each of these songs in a slow and relaxed manner until you get the timing down. It can be a good idea to listen to the recording as you play. If at all possible, try to sing along to the song, as this will help you learn.

What Makes an Acoustic Guitar Song Easy to Play?

Easy guitar songs have a simple strumming pattern and not a lot of complexity. Many songs sound more advanced than they actually are. 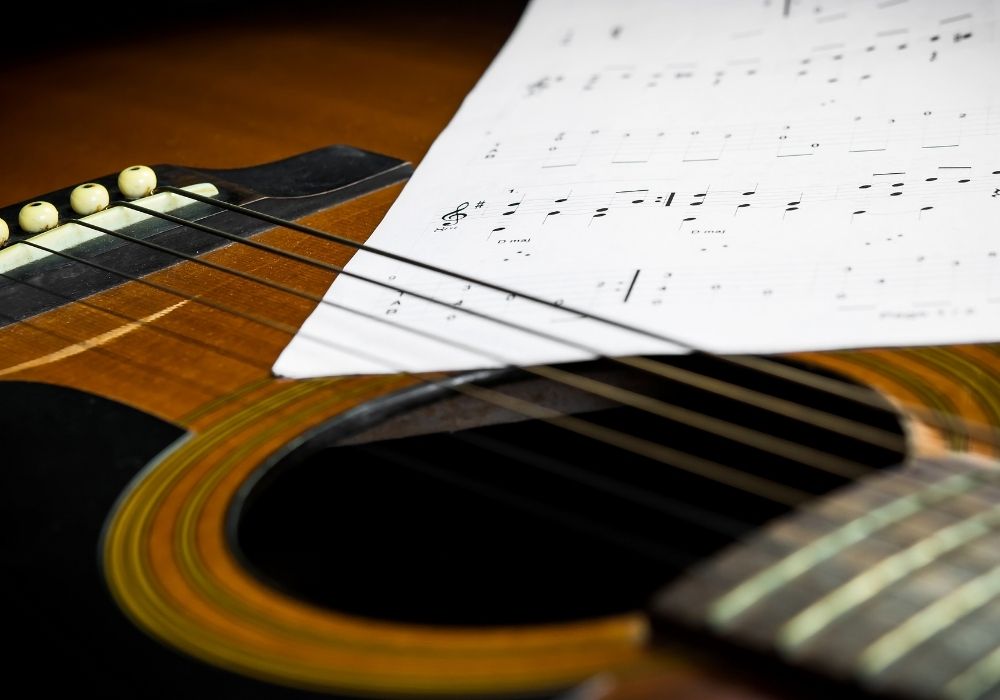 The songs below are all easy to play, and you shouldn’t have much problem with them, even with only basic guitar skills. The strumming patterns aren’t difficult, and you should be playing the songs in no time at all.

Before you learn easy songs for acoustic guitar, you need to learn some guitar chords. There are some basic guitar chords that you need to know. By learning these chords, you’ll be able to play thousands of songs.

These chords are all suitable for beginners, and they’re the key chords you need to know. Take some time to learn these chords fluently, and then add more to your repertoire.

There are thousands of different chords, but the basic ones can get you a long way. Most other chords are just variations on these simple chords with notes added or taken away.

Once you know some guitar chords, it’s time to learn some strumming patterns. The patterns below are all suitable for beginners, and you shouldn’t have any problems with them. 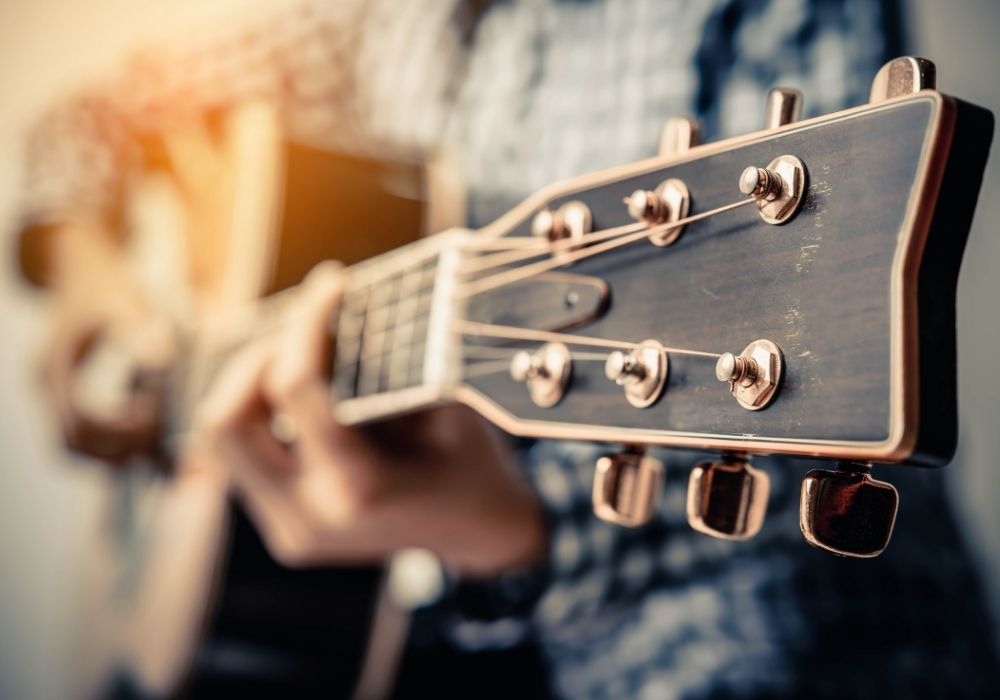 This first pattern can be used with any chord. It’s a simple downstroke pattern. We’ll play it in 4/4 time, so it gets four beats to a bar all in downstrokes. You play it as follows:

As you are playing in this pattern, you can count to four. Each stroke gets one beat: one, two, three, four. This is the simplest pattern that you can play and it’s important for beginners to learn.

The next pattern is almost the same, but with one small change. This pattern is going to be played:

This pattern uses all down and upstrokes in a continuous pattern. The strumming is as follows:

This list will give you some easy beginner acoustic guitar songs to play. The songs all feature basic strumming patterns that most beginner guitar players should be able to pick up on.

Some of these songs have been simplified from the original versions to make it easier for you to play. But, they should sound similar to the original recording when you strum them.

You can make the strumming pattern as simple or as complex as you want, depending upon your current guitar playing level.

Free Fallin by Tom Petty is an easy acoustic guitar song to learn. I like playing this song because there’s not a lot to it, yet it sounds great. It’s easy to play the song and sing along with it.

This is the opening track to his album Full Moon Fever, and it remains my favorite acoustic guitar song to this day. It’s the most famous and highest-charting song he ever had. You’ll enjoy playing along with this one.

Wonderwall by Oasis is an easy-to-play song that sounds great thanks to the suspended chords. These chords have a different sound compared to regular major and minor chords, which helps the song stand out.

3. House of the Rising Sun – The Animals

One of the first songs I learned to play on the guitar was House of the Rising Sun by The Animals. Most people haven’t heard of the group, but they have heard this song. It’s a nice introduction to guitar arpeggios or broken chords.

The arpeggio pattern itself is not all that difficult. It’s a great lesson for students to learn how to move between individual strings. This is a song that any beginner can pick up and play right away.

Creedence Clearwater Revival (or CCR) is one of my favorite bands of all time. Bad Moon Rising is one of their simple songs. The song uses the basic D, A, and G chords, so any beginner can learn how to play it.

The strumming pattern is not difficult at all. You can add in your own strum variation if you want to spice it up a bit. You can play this on acoustic guitar or electric guitar if you prefer. This is a great beginning guitar song to know.

The original recording of Louie Louie is played with electric guitar, but it’s easy to translate it to the acoustic guitar using simple chords. This is another one of the first songs I learned, and it’s a lot of fun to play.

You can impress your friends by learning this song, and it won’t take you very long to master. It’s simple but a lot of fun to play using easy acoustic guitar chords everyone knows.

Stand By Me by Ben E. King is another simple song that you can translate to the acoustic guitar, and it sounds great. This is one of the first songs I learned, and it’s a lot of fun to play.

This song is in the movie of the same name. I like the song’s atmosphere with the four boys running down the railroad tracks when the song is playing in the movie.

Make sure you listen to the chord changes and rest between each downstroke to get a feel for the timing. You can also use other strumming patterns to play this song, but this is a simple version that even beginners can pick up on.

Take Me Home Country Roads by John Denver is a great introduction to country guitar playing. It uses simple chords throughout most of the song. This is one of John Denver’s most popular and influential songs.

If you have a problem with the F chord, try an Fmaj7. You don’t have to worry too much about this chord, as it only appears in the song’s bridge. Play the song slowly and get used to the timing.

Turn the Page by Bob Seger is another easy acoustic guitar song. It uses the easy open position chords that any beginner can play. The strumming pattern is quite easy, and you can also use your own variation on what I have here.

Make sure you have a relaxed feel with your strumming when you are playing, as this will help you get the timing down.

I enjoy playing Brown Eyed Girl, and you don’t need a lot of guitar skills to play this simple four chord song. The hardest part is the short lead at the beginning, but we won’t worry about that here.

Practice the chord changes to this song, and you’ll soon have it down. It’s a good song to practice your open position chords.

One of the easy acoustic guitar tunes I first learned was Dead Flowers by The Rolling Stones. This is a simple D A G chord progression. There are a couple of suspended chords you can add to the D chord if you like.

Keep the strumming nice and relaxed, and try to sing along with the lyrics if possible. This is an excellent song to learn for basic chords, and it’s a lot of fun to play.

There are several different types of acoustic guitar music. Here are some of the styles that you might want to consider listening to or play yourself. 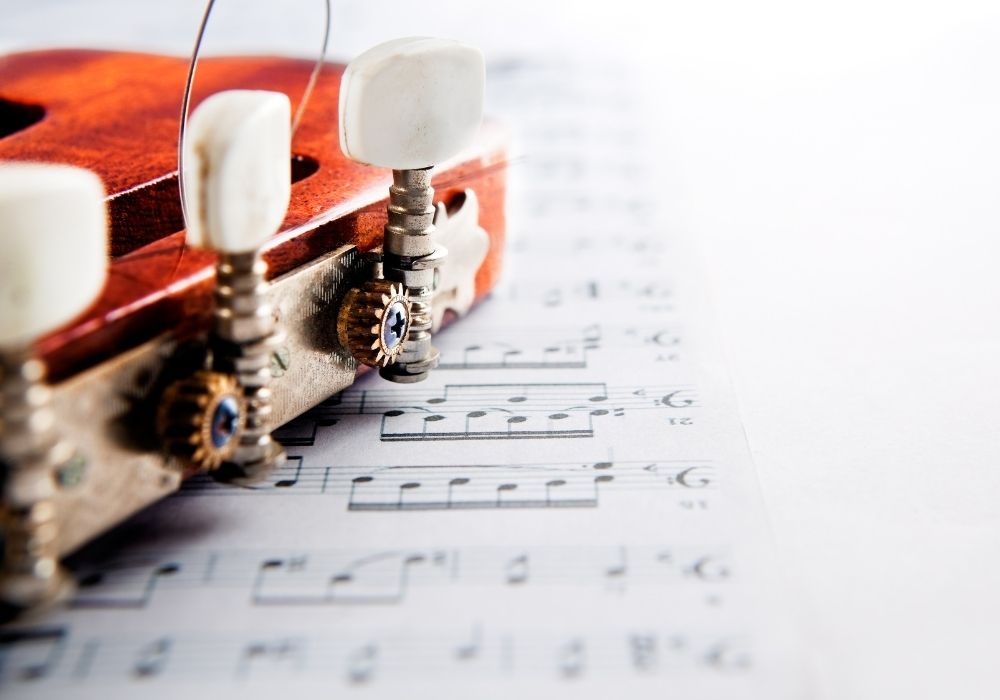 One popular type of acoustic music is folk music. This gained popularity in the 1960s with artists such as Bob Dylan and Joan Baez. These are often simple strumming songs that are easy to sing along with.

Another type of acoustic guitar music is rock music played on an acoustic guitar. This type of music was popular throughout the 1950s to the 1980s. These songs are sometimes combined with the electric guitar.

Blues music is often associated with an electric guitar, but you can also play acoustic blues music. These songs employ a lot of fingerpicking patterns and are a little more complex than your basic song.

Another type of acoustic guitar music is fingerpicking. This is where you eliminate most strumming and play songs using your thumb and fingers. This gives a unique sound that’s popular with a lot of players.

Acoustic guitars are often used in country music. These songs are often played with simple strumming patterns and simple open position chords, so they’re easy for beginners to play.

I hope you enjoy this list of easy songs for acoustic guitar. Beginner acoustic guitar songs are fun to play, and you should be playing all of these songs in no time at all.

Please like, share, and leave your comments on this article. I look forward to hearing from you. Now, go pick up your acoustic guitar and start jamming along with these great songs.