Best Mandolin Players of All Time

Who’s the best mandolin player in the world?

I hope that in this article I can answer this and many other questions about the most famous mandolin players. It’s certainly a subjective question, as each one plays a different style of music.

Here I selected the 10 best mandolin players based on the overall popularity and level of renown of these musicians. If you’re looking for inspiration for your mandolin melodies and songs, join me to explore the music and the stories behind these 10 incredible musicians.

What Makes a Great Mandolin Player?

What makes a good artist? That’s a good question. 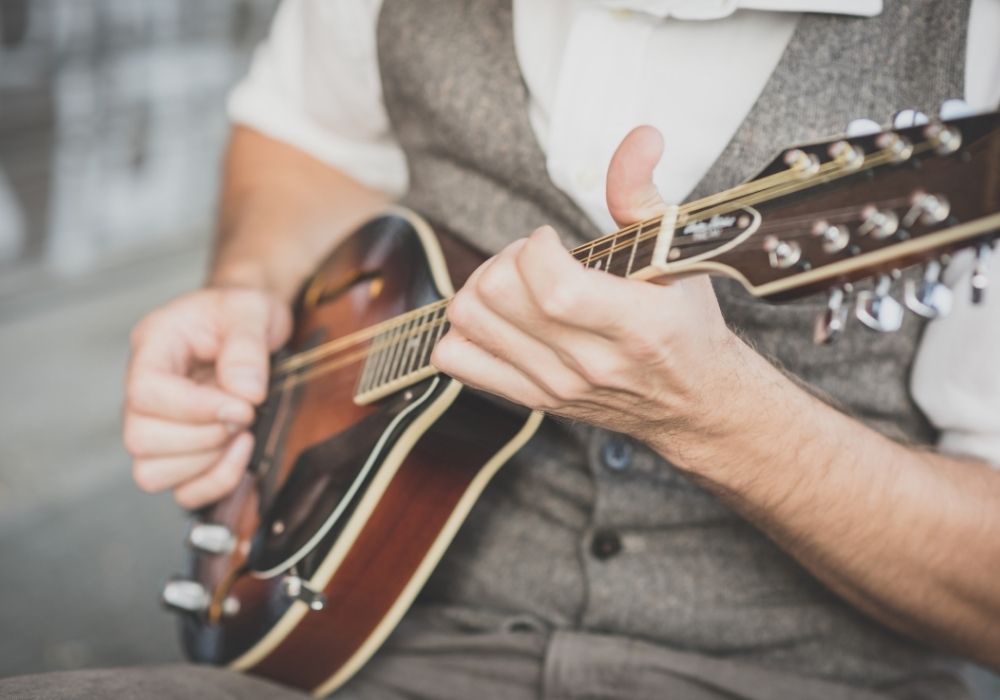 In my personal opinion, it’s a mix of technique, creative innovation, composition, and performing skills. If the blend of these concepts comes with a unique and interesting vision, it means we have a great and talented artist.

Chris Thile is a young talented artist who’s conquered many musical styles with his mandolin throughout his career. Chris began playing the mandolin at the age of five, after seeing John Moore’s band Bluegrass, which inspired him to learn this instrument.

Soon after, he joined some friends to create his first band Nickel Creek, and they started performing in local festivals and recorded their first album.

Mixing country and bluegrass with modern vocals and classic melodies, this band went on to evolve and record six more albums. They won a Grammy for the Best Contemporary Folk Album for their fourth album This Side.

Considered the best mandolin player in the world, Chris Thile is an amazingly creative artist with a unique and vibrant musical vision.

David Grisman is a famous artist that mixed jazz, folk, and bluegrass in his compositions. His style could be defined as heavily inspired by Django Reinhardt and Stephane Grapelli. Their fast version of jazz is quite prominent in the fast folk-like compositions of David Grisman.

This artist formed several jazz/folk bands and recorded an album with the famous Grateful Dead, and he toured with this band for several years.

The music created by David Grisman contains light and fast jazz-like themes and melodies that flow between contrasts and progressions. This beautiful blend creates a relaxing and refreshing experience that’s easy to grasp and absorb.

Not only a TV performer, this artist has some amazing mandolin skills and quite ingenious ways to blend comedy and music.

In mandolin related forums, you can find numerous fans obsessed with Jethro Burns, which gives testimony to how influential this musician is in the world of mandolin.

Ricky Skaggs is a world-famous mandolin performer. His advanced technique on this instrument made him an important figure in country music.

Ricky was introduced to the mandolin at the age of five by his father. He fell in love with the instrument and started practicing and learning new tricks and techniques.

A year later he was able to perform with the famous Bill Monroe in a live performance. From that point on, his career took off. He won several Grammys and became a member of the Country Hall of Fame.

Bill Monroe is often called the Father of Bluegrass, as he and his band The Blue Grass Boys created the aforementioned musical genre. Born in Kentucky, William Smith Monroe was raised in a musical family, where almost every member could play and perform folkloric songs.

After his parents died, Bill Monroe moved in with his uncle Pendleton “Pen” Vandiver, who played the fiddle. Hearing his uncle play inspired young Bill to learn to play himself. In 1929 he moved to Indiana to form the Monroe Brothers with his brothers Birch and Charlie.

After the Monroe Brothers were disbanded, Bill formed another country band called The Kentuckians. This group didn’t last long and was dissolved after only three months. Soon after that, Bill Monroe moved to Atlanta, Georgia, and formed his most famous group The Blue Grass Boys.

This musical formation brought Bill Monroe worldwide fame, and he’s now known as the founder of the bluegrass musical style.

Born and raised in Kentucky, Sam Bush developed a passion for country and bluegrass music from a very young age. He used to listen to this music with his father, who had a big collection of recordings.

In 2020, Sam Bush was inducted into the International Bluegrass Hall of Fame.

Adam Steffey is a world-famous mandolinist who’s won several Grammys during his prolific career. This artist explores in-depth the old traditional styles of country and bluegrass.

Adam was raised in Norfolk, Virginia. Soon after his father’s retirement, he moved to Kingsport, Tennessee. There he learned to play the mandolin and participated in several performances in his local college.

Billie “Tiny” Moore was a Western swing musician with a prolific career. His musical style oscillates between several styles, such as jazz, country, blues, and swing.

Born in Port Arthur, Texas, Tiny Moore learned to play at a very young age, and he became obsessed with the mandolin. In later years he wen on to join The Texas Playboys and compose most of the greatest hits of this band.

Tiny Moore is an important figure in the development of the mandolin, and he experimented with different configurations of strings for the instrument. Finally settling down with Paul Bigsby’s five-string mandolin, Tiny Moore became inseparable from his beloved instrument.

Mike Marshall is a master mandolinist who toured with famous musicians like Chris Thile, Jerry Douglas, David Grisman, Bela Fleck, and many others. With an eclectic style and a good grasp on modern and traditional sensibilities, Mike is an admired and respected personality in the world of the mandolin.

He grew up in Florida, where he won Florida State contests on the mandolin and fiddle. After moving up to California, he worked with his childhood idol David Grisman. The two of them collaborated on film scores and later on, Grisman asked Mike to join his quartet.

Mike Marshall is a musician dedicated to his instrument who always delivers world-class performances with his vintage Gibson mandolin.

This virtuoso musician composed more than 103 tunes and melodies in his own unique and beautiful style. Being a perfectionist, Jacob would rehearse all day and night, achieving high levels of technique and professionalism with the mandolin.

Jacob do Bandolim was certainly one of the best classical mandolin players in the world, and his elegant and technical style could be compared to what Django Reinhardt did with the classical guitar.

You can play any musical style with the mandolin, but the traditional ones are bluegrass, folk, jazz, blues, and classical. 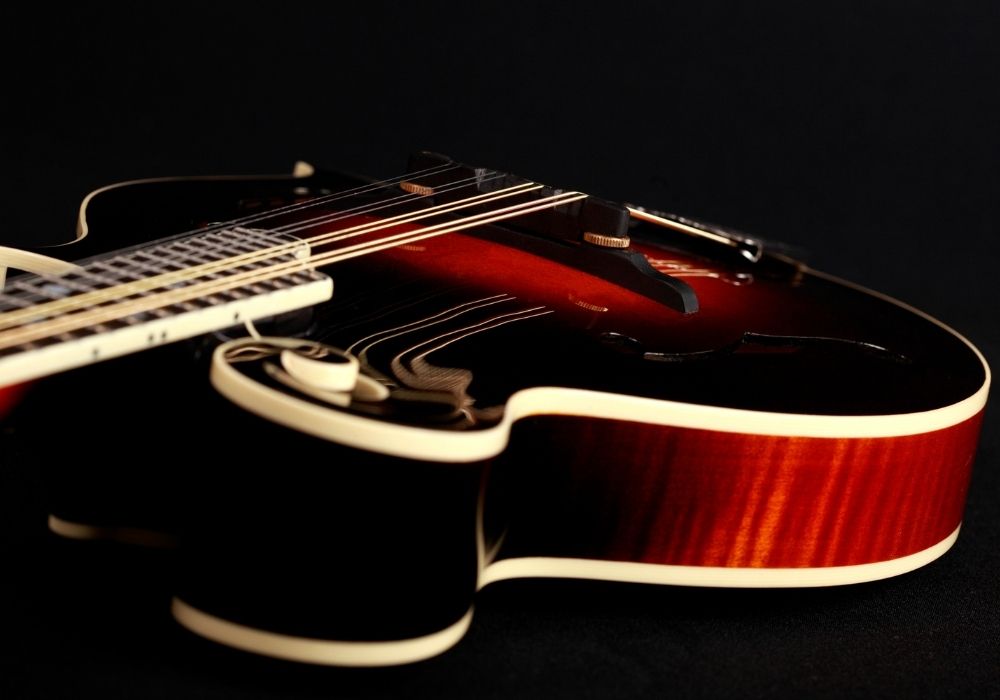 Its pure acoustic sound with the chorus-like harmonics of the double strings provides the correct sound for these mostly traditional styles of music.

Bluegrass is a subgenre of country music that took a more traditional and folkloric approach to its sound. Bluegrass music is normally performed on acoustic instruments like the banjo, fiddle, mandolin, upright bass, and guitar. The best bluegrass mandolin player is Bill Monroe, and he and his band formally created this musical style.

Folk is a wide term applied to many different styles. Traditionally, folk music comes from the folkloric music of each country and province. This musical style is characterized by peaceful melodies and the use of traditional acoustic instruments like the harp, mandolin, guitar, banjo, and many others.

The most important figure in folk music related to the mandolin is David Grisman, as his style and technique with this instrument elevated this musical genre as a whole.

Jazz is a unique genre that blends repeated chord progressions with complicated improvisational sections. This style of music is perfect for virtuoso musicians who want to shine in their solos and create a unique and groovy ambiance in the venue.

The best mandolin player in the jazz style is considered David Grisman. The groovy nature and refreshing freedom of David Grisman’s performances make him one of the best in this genre.

This style originated in the Deep South of the United States and is inspired by traditional African music. Characterized by its sad nature and groovy rhythms, blues is the foundation for many modern musical styles like jazz, rock, and R&B.

One of the greatest performers in this genre is Yank Rachell. His unique musical sensibilities on the mandolin helped evolve this instrument’s techniques further in relation to blues.

The mandolin is native to this genre, as this instrument was created to perform classical pieces in medieval Italy. The mandolin was used as an accompanying or solo instrument in classical concertos. This instrument added a certain brightness to the orchestra and was frequently used in many compositions during the late Baroque and early Romantic eras.

The best classical mandolin player as of today is certainly Chris Thile. His ability to mix several styles and create something truly unique makes him a world-class artist and expert with this instrument.

Here are the three best songs that use mandolin as an important foundation.

The Battle of Evermore – Led Zeppelin

This one is my favorite, and it made me really notice the mandolin as a solo instrument. This song starts with a dreamy and folky mandolin riff inspired by British folklore. Later on, we can hear the vocals of Robert Plant, mixed with a ton of delay and reverb, which gives this song a psychedelic color. It’s a truly memorable tune, as is often the case with Led Zeppelin and their songs.

Grateful Dead – Friend of The Devil

This classic from the Grateful Dead is a simple and elegant song with some folk ideas. The mandolin here is composed and recorded by the famous David Grisman, who is certainly the best person to add some mandolin to the Grateful Dead. This track is a living reminder of the beauty and peace of the ’60s and the unique music this era created.

This song is probably the most recognized mandolin song in the world. Although this band is not exactly famous for their mandolin parts, this song is built around a simple but memorable mandolin riff that carries the whole song on its back.

I hope some of these best mandolin players and their music will inspire you to dive deeper into the amazing world of the mandolin. From classical to bluegrass and folk, the mandolin will embellish any tune if played with passion and love.