The 10 Best Violin Duets of All Time

The best violin duets of all time including all different types of violin music and famous violin songs that everyone knows and loves.

Violin duets are a popular category of repertoire for students and professionals alike. Duets are a great introduction to chamber music for beginning players, and many pedagogy programs feature duets in any range of levels. They’re also popular with performing artists, and there’s a wealth of music to discover in this category.

In addition to their practical uses, duets come from a plethora of diverse composers. In a world dominated by European-born, cis men, this is a wonderful opening to discover diverse and innovative composers and performers.

As a professional violinist, I’ve performed many duets, and I often use them in teaching to help students improve their chamber music skills, musicality, and overall technique.

Below, you’ll find 10 wonderful violin duets and links to my favorite performances. While the title of this article makes a claim to finding the “best” duets, that term is necessarily subjective. I’ve included the following pieces according to their compositional quality, importance to the violin repertoire canon, and pedagogical merit. I hope you’ll take a listen!

What Makes a Great Violin Duet?

Violin duets offer musical possibilities impossible with only one violin, and the combined forces of the two instruments can result in an extensive range of music. While there’s never a specific factor that makes any given duet great, there are compositional techniques that make some works stand out. 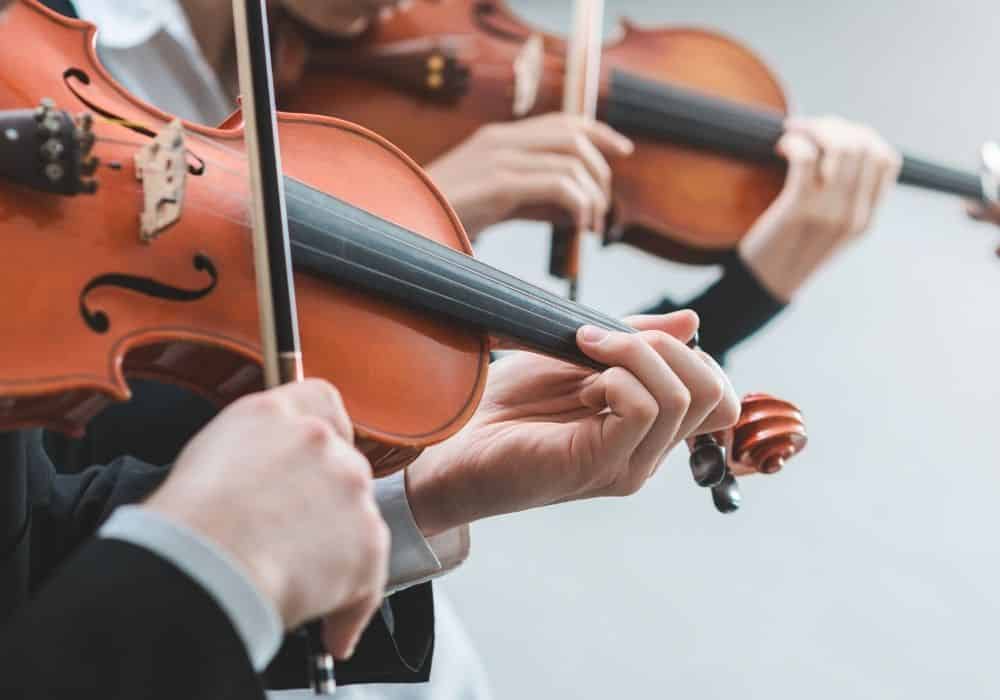 Because violin duets are written for two of the same instrument, composers have to work harder to distinguish the two voices in a piece. Pieces that offer contrasting voices for each instrument, utilize the full range of the instrument, and tell a story are a joy to listen to and play.

The term “violin duet” implies pieces written for only two violins. I prefer to think of a broader definition of the category: one that includes sonatas and concertos as well. The most famous example is Bach’s Concerto for Two Violins, a favorite of students and professionals alike. Here are the three main categories of violin duets:

These pieces are written with just two parts, one for each violin. They’re intricate works of chamber music and are useful and fun teaching tools. Popular examples of violin duets are Prokofiev’s Sonata for Two Violins, Bela Bartok’s 44 Duos for Two Violins, and Eugène Ysaÿe’s Duo Sonata.

An extension and adaptation of the more common violin sonata, these works are written for two violins and piano. A split between the traditional violin sonata and the very popular instrumentation of piano trios (violin, cello, and piano), they follow similar compositional conventions in unique ways.

Dmitri Shostakovich’s Five Pieces for Two Violins and Piano is a very popular example of this category.

Bach may have pioneered this category, but ever since, composers have taken the form and run with it. Wolfgang Amadeus Mozart, Philip Glass, Arvo Pärt, Pablo de Sarasate, and Eugène Ysaÿe have all written concertos for two violins.

Below, you’ll find what I consider to be the 10 best violin duets. I have chosen this list based on each work’s significance to the violin repertoire canon, their pedagogical importance, and my favorite pieces to both play and listen to. I’ve also included my favorite recordings, and I hope they will inspire you to go down a new path in your listening journey!

The “Bach Double” is perhaps the best-known violin duet of all time. Not only that, but it’s one of the most famous violin pieces. Since its premiere in the middle of the 18th century, Bach’s Concerto for Two Violins has been performed by almost every major orchestra in the world. It’s a staple of the violin repertoire.

This duet is also an incredible pedagogical tool, and almost every violin student learns this piece at some point in their education. Despite the popularity and fame of the piece, the technological requirements to perform it are far more accessible than more virtuosic pieces, making it an excellent option for violin students and performers of all ability levels.

The first time I heard Prokofiev’s Sonata for Two Violins, I was completely overwhelmed. Prokofiev is often portrayed as straddling a fine line between the lush, tonal romanticism of the 19th century and the more experimental, less “beautiful” trends of the 20th century. Nowhere is this tightrope act more noticeable than in this sonata.

Prokofiev masterfully showcases the range and abilities of the violin and weaves together the two violin lines in a graceful, soaring dance. This sonata requires immense control and technical ability, but when performed well, it will take your breath away.

After Bach’s Double Concerto, Béla Bartók’s 44 Duos are perhaps the best-known violin duets. They’re similarly prominent in pedagogy and are a wonderful teaching tool for young violinists and those working to perfect their technical skills and musicianship.

Despite the accessibility of this collection, Bartók never sacrificed musical sophistication. These duos are an excellent entry point to the composer’s groundbreaking compositional innovations and impact on the classical music canon.

Shostakovich’s Five Pieces for Two Violins and Piano is the most famous example of writing for two violins and piano. Shostakovich is well known for his moody, revolutionary Soviet-era writing, but this collection is striking in its gentle, lyrical lightness and romanticism.

These pieces are at once fun, heartbreaking, loving, and delightful. They’re an excellent example of a composer tipping his hat to tradition but putting his own spin on it, twisting it in unique and creative ways.

5. Sonata for 2 Violins in A Minor

Ysaÿe is lovingly referred to as the King of the Violin. He is best-known for his six sonatas for solo violin, based on Bach’s Sonatas and Partitas, but in this Sonata for 2 Violins, the composer showcases an even greater range of violin expertise.

This piece is without a doubt from the 20th century, and it’s a virtuosic example of what’s possible when two violins join forces.

His Rocking Mirror Daybreak is an intimate exploration of the violin, but at many points unusual aspects pop up, catching the listener off guard and turning everything you expected on its head.

Augusta Read Thomas is a giant in the contemporary American composition scene. The resident composer and composition professor at the University of Chicago, Read Thomas is creating work that’s quickly becoming essential to the classical music canon.

Her “double helix” is twisty, complicated, and joyful, and it pushes the boundaries of what a violin duet can be.

If Augusta Read Thomas is now at the pinnacle of the composition world, this success was made possible because of composers like Grażyna Bacewicz. Born and raised in Poland during the height of 20th-century political tensions, Bacewicz was a groundbreaking composer and one of the most famous female composers of her time.

She is well-loved for her chamber music, and this Suite for Two Violins does not disappoint. Although she was writing in the 20th century, I find her music to often be far more accessible and lyrical than other 20th century works, and, most of all, they’re fun, both to play and listen to.

Arvo Pärt was the most listened to living composer in the world between 2012 and 2018, and Tabula Rasa is one of his best-known works. Although it pushes the definition of a violin duet, it represents the full extent of creativity in this category. No list of violin duets would be complete without it.

I’ll leave the interpretation up to you.

The final piece in my list is a fitting tribute to the history of violin duets. Anna Clyne wrote the piece while “contemplating the presence of musical lineage—a family-tree of sorts that passes from generation to generation.” It was written especially for legendary contemporary violinists Jennifer Koh and her mentor at the Curtis Institute of Music.

The piece traces these lineages between performers and composition styles. Nods to other violin duets and double concertos pervade the work, like a musical family tree.

Violin duets are a uniquely diverse category, and there are no superior composers. It’s my hope that you’ll give every work in the list above a listen and follow your own resulting interests to find even more options. 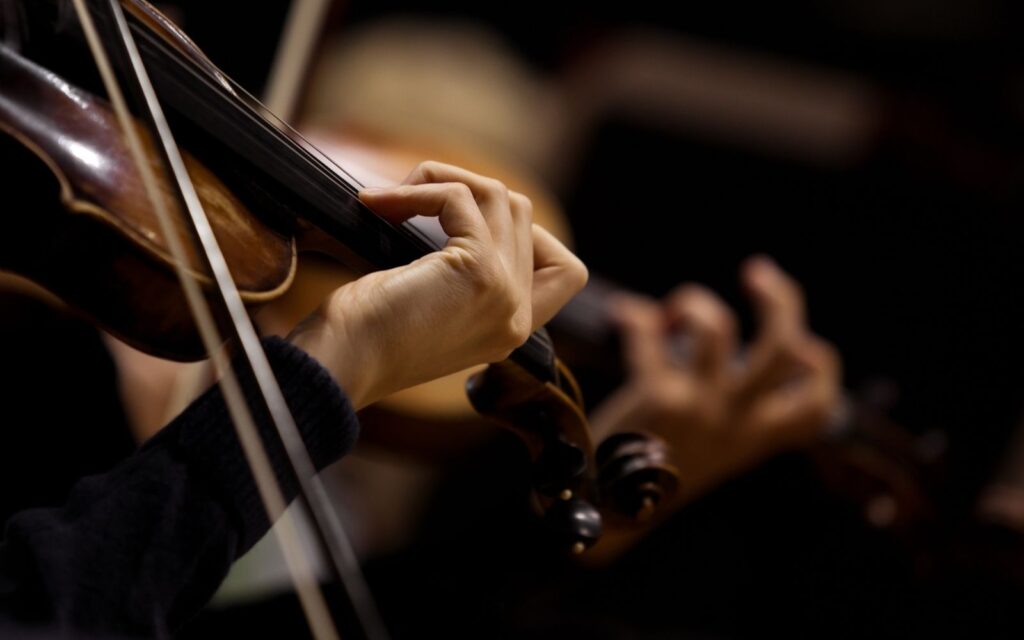 However, time is not unlimited, so here are the three composers and pieces you should listen to first.

Bach’s Double Concerto cannot be ignored in the violin duet canon. It’s an important piece in the violin repertoire, both historically and pedagogically.

Prokofiev’s Sonata for Two Violins is a beautiful work, and its composition pushed the boundaries of what a violin duet and what a 20th-century piece could be. I cannot recommend this piece enough.

The world of 21st-century music would not be what it is without Augusta Read Thomas. While her violin duet is far from her most famous work, it’s a beautiful example of the genre and should not be overlooked.

Violin duets are as expansive, diverse, and creative as any other category of chamber music, and there are delightful pedagogical and musical works to be found. I hope this list helps you start your listening journey and find some new and exciting music to add to your rotation!