You may be wondering what the best electric guitar songs are. The electric guitar is one of the most popular instruments of all time, and many popular songs have been written by a wide range of diverse artists.

These are my picks for the top 10 best electric guitar songs. You may have some that you like that aren’t on this list, and that’s fine. This list is subjective because we all have different tastes in music.

All of these songs are loved by millions of people worldwide. They’re iconic songs that everyone recognizes. You’re sure to find a song here to inspire your own playing.

There are several things that go into making a great guitar song. One of the first things is the rhythm and the beat of the song. It has to be something memorable that appeals to a wide range of music listeners. 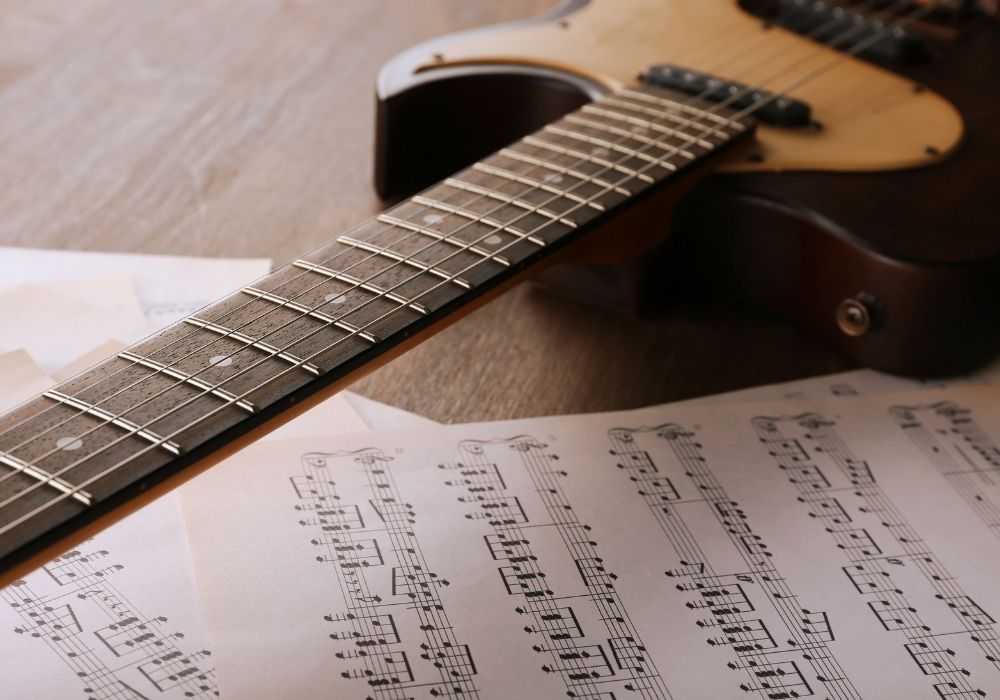 These are some of the best electric guitar songs that you can learn. They cover the rock, metal, and blues genres. These are songs that I grew up with and songs that inspired me to get better at guitar.

There are several different types of electric guitar music that I’ll be covering in this guide. Here are the major types of music that we’re going to be looking at. Keep in mind that these are only basic categories.

The largest category of electric guitar songs is rock and roll. This is the genre that started the love affair with the electric guitar. Countless artists have defined this genre, which began in the 1950s.

Rock players in the 60s and 70s started to combine blues guitar with regular rock and roll. This gave us the harder edge blues-rock genre. This is basically sped-up blues music with faster guitar solos.

In the later part of the 1970s, music started to get heavier. Players started using more distortion and playing even faster solos than they were before. This defined the early days of the heavy metal genre that took off in the 80s.

Popular guitar refers to pop music or music that’s loved by the general audience. These songs are usually easier to listen to and have a nice pleasing beat and rhythm to them.

Jazz electric guitar combines traditional jazz music with the electric guitar for a lot of interesting sounds. Some of the best players on the instrument are found within the jazz genre.

Technical guitar is guitar played to the highest level possible. Most artists at this level play mind-blowing music. It takes a lot of skill and years of practice to reach this level.

Here is what I consider to be the 10 best electric guitar songs. These are my own personal choices. Many of these songs were an inspiration to me when I was first learning how to play guitar. 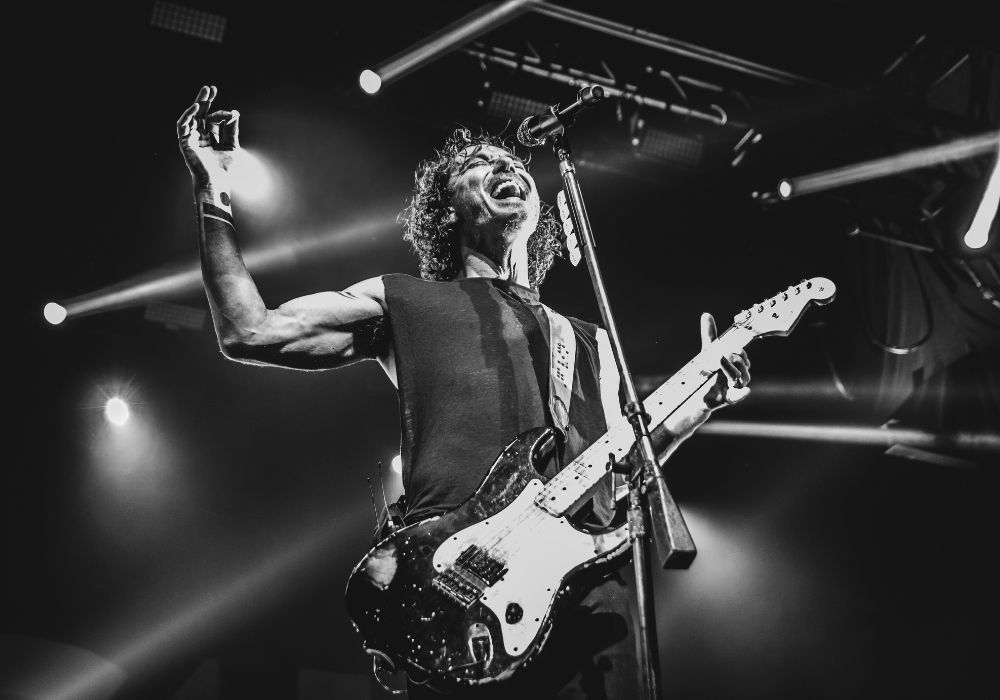 The first song I learned on guitar was Iron Man by Black Sabbath. This is an easy song to pick up and play for a beginner. It has a nice simple rhythm to it, but it sounds heavy, and this is why it appeals to new guitar students.

The song’s solo is a nice beginner solo which isn’t too difficult as long as you have a few guitar techniques under your belt already. The rhythm of the song is instantly recognizable and it has one of the most popular riffs of all time.

In any jam session, they’re probably going to be playing Freebird. This song has an easy progression that most players can pick up on right away. The part of this song that is so inspiring is the long and extended solo.

This is a great song to jam on because you can play your own solo throughout the song’s ending, or you can try to learn the solo note-for-note. This song is instantly recognizable, not only by guitar players but by the general audience.

David Gilmour is my favorite guitar player because he’s expressive on the guitar. His signature song is Comfortably Numb. This song features an amazing solo that is full of melodic movement.

This song from the Wall album is instantly recognizable as Pink Floyd and is one of the band’s top songs of all time. The solo alone puts it into my top ten best electric guitar songs.

Eddie Van Halen set the guitar world on its end when Van Halen I came out. The highlight of the album is the song Eruption. It’s a pinnacle of Eddie Van Halen’s talent and showcases his tapping technique.

This is the song that launched countless rock guitar players who studied Eddie Van Halen’s playing and developed their own styles. This solo is loved by countless musicians as well as regular music listeners.

Eric Clapton is one of my favorite all-time guitar players, and his playing on the song Crossroads is exceptional. It showcases his mastery of the blues-rock genre. His playing during the Cream days is some of his best work.

Many different players have copied the solos for the song, which is one of Cream’s best. This was during a time when he wasn’t using a Fender Stratocaster. In this song, he used a Gibson guitar.

When I first heard Pride and Joy by Stevie Ray Vaughan, I was impressed by how upbeat the song’s tempo and rhythm was. I’d never heard blues guitar played that way, with such an aggressive attack.

Stevie Ray Vaughan is one of my all-time favorite guitar players, and this is one of my favorite songs of his. I hear this song all the time when I go to my local club with friends, as it’s a great one to jam along to.

Sweet Child O’ Mine is one of my favorite Guns N Roses songs. It starts with an excellent riff that is one of the most recognizable ones of all time. I hear this song played at clubs all the time because it’s so popular.

It has a great rhythm to it as well as an excellent and memorable solo. Slash’s playing on this track is a highlight of the Appetite for Destruction album. This particular track takes me back to my youth in the 1980s.

Stairway To Heaven is one of my all-time favorite songs. This tune is a great combination of fingerpicking and strummed chords with a great rhythm and an excellent solo all in one song.

Jimmy Page was able to create an absolute masterpiece. This is one of the highlights of Led Zeppelin’s career. I never get tired of hearing this song. The opening riff of the song is an instant classic.

The song Enter Sandman off of Metallica’s Black album is the song that helped propel them into the limelight. The song has a great heavy riff that’s instantly recognizable. This is one of their most popular songs ever.

This is also a tune that I have enjoyed teaching to younger students who start their own journey on the guitar. It’s easy to pick up and play, and it sounds great. It has an excellent rhythm along with a great solo.

One of the first riffs I ever learned on guitar was Smoke on the Water by Deep Purple. The riff is easy to play, yet it’s instantly recognizable when anyone plays it. I remember going home and practicing this song after only a few lessons.

Guitar players worldwide have learned this song at some point or another. It’s easy enough for even beginner players to pick up. Smoke on the Water will always remain a classic song and one of Deep Purple’s best tunes.

Here is a list of the best electric guitar players. These are my top three choices of guitar players that inspired me in my own playing. 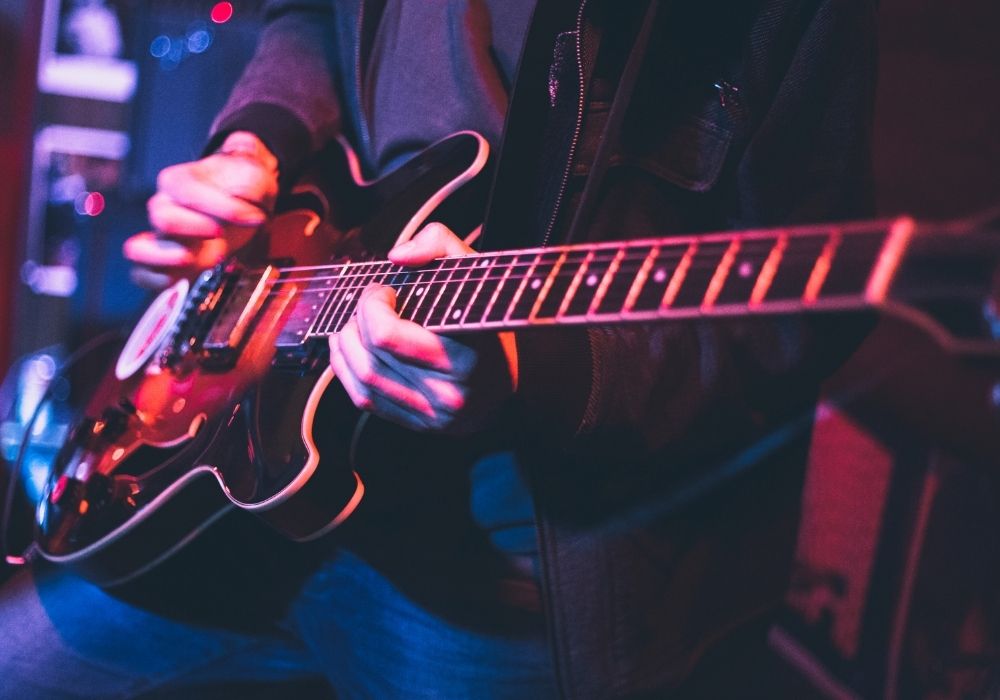 They are all unique and bring something special to the electric guitar.

The world lost a legend a little while ago when Eddie Van Halen passed away. He is one of the most inspiring musicians of all time. He had a unique way of playing the electric guitar.

He has inspired countless musicians to pick up the electric guitar. Songs such as Eruption, Running with the Devil, Panama, and Hot for Teacher are some examples of his amazing playing.

Another musician that inspired me to pick up the electric guitar is Randy Rhoads. I first heard him playing on Crazy Train by Ozzy Osbourne. I was amazed by the guitar that I heard throughout that song.

His amazing playing can be heard on other songs such as Mr. Crowley, Suicide Solution, and other great tracks. He was only with us for a few years, so it’s unknown what sort of additional impact he would have had on music had he lived.

Another musician who inspires me is Stevie Ray Vaughan. I consider him to be one of the best electric guitar players of all time. He had an amazing aggressive blues technique that is inspiring to listen to.

Songs such as Pride and Joy, Lenny, Texas Flood, and Couldn’t Stand the Weather are some of my favorite tracks. He was an amazing player and one of my biggest influences on the electric guitar.

Thank you for reading my guide to the best electric guitar songs. There are countless great artists out there, so you should draw inspiration from the ones that you love. These are artists that all inspired me.

Please comment, like, and share this article. I look forward to hearing from you. Now, go pick up your electric guitar and write the next hit song.