Easy Songs for Electric Guitar (Plus Chords & How to Play)

If you’re new to electric guitar, you might not know which songs to play at first. This guide to easy songs for electric guitar will help you get started.

I’ve also included some easy electric guitar chords to learn. These are basic standard power chords that make playing electric guitar a lot of fun because you can play them with plenty of distortion.

I’ve played electric guitar for many years. I found the songs below to be a great inspiration in my own playing. I hope you enjoy these songs as much as I do. They’re all quite easy to play, and you’ll have a lot of fun.

What Makes an Electric Guitar Song Easy to Play?

Easy guitar songs on the electric guitar have a combination of chords, easy riffs, and simple melodies. What makes these songs stand out is that they’re memorable. 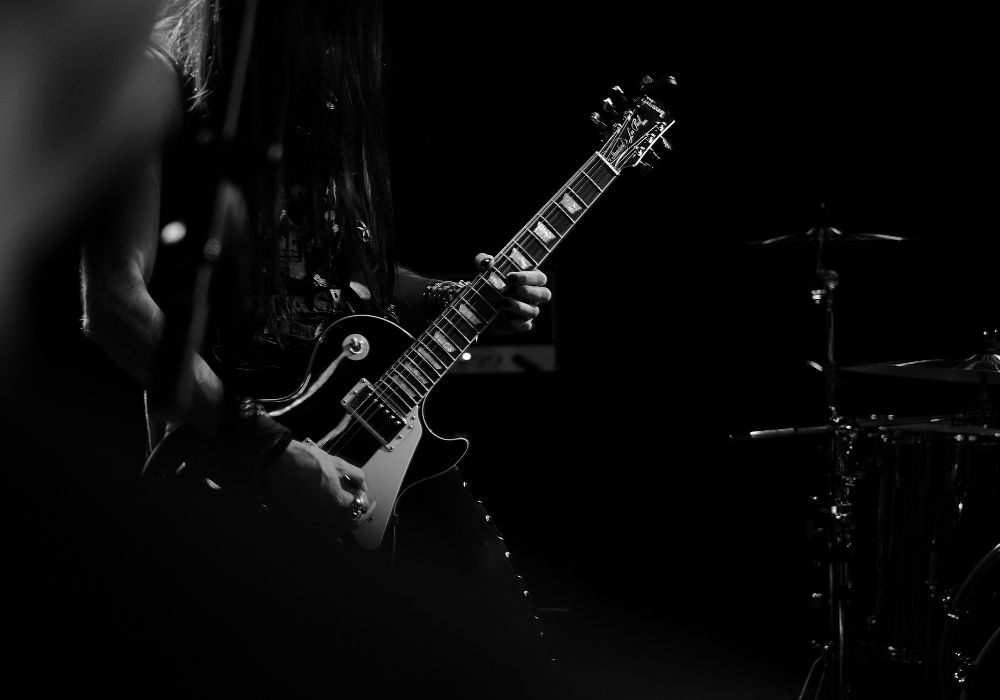 These songs are instantly recognizable even if you don’t play guitar.

Some of the easiest guitar chords to play on the electric guitar are what we call power chords. These are not really full chords, but a root and a 5th. They work quite well with distortion and are used by countless guitarists.

You can, of course, also use regular open position chords, which most players already know. If you play a lot of rock music, you’ll find these chords in plenty of songs.

Power chords are some of the simplest chords to play. By learning these chords, you’ll be able to play most songs. The E5 power cord at the second fret is simple to play.

The G power chord is played at the third fret. This gives you a root on the sixth string, and in this case, the root note is G.

The D power chord is moved over one string. The root note, which is D in this case, is played on the 5th string.

The B power chord is played on the 5th string with the root note as B.

This short guide will introduce you to some guitar strumming and other patterns that you can use on electric guitar. 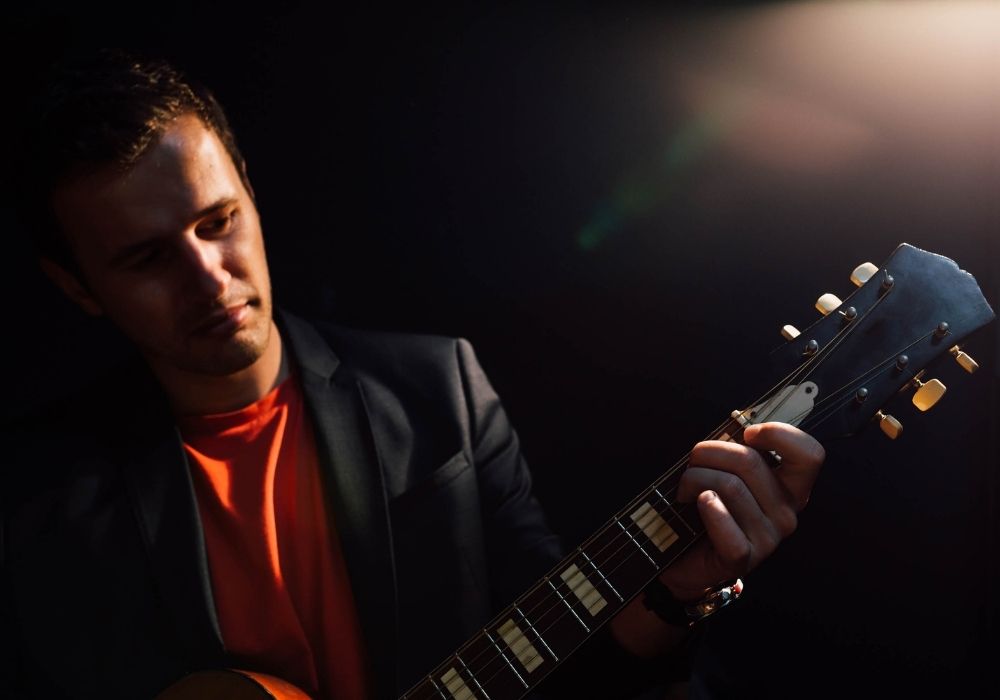 There are many different strumming patterns that you can use while playing the electric guitar.

This pattern uses power cords and groups of four notes. You play the power chord and count to four as you’re playing. You get a beat of 1234, 1234. This is usually played with palm muting to get the chug feel.

A power chord shot is often used to break up a song. This is where you play one power chord for a beat and then allow it to ring for several more beats. You can think of this as playing a chord, rest, rest, rest, and then another chord.

A guitar riff isn’t really a strumming pattern, but a way to create a short piece of music that’s memorable. The riff is often is the highlight of the song. Most popular electric guitar songs have several repeatable riffs.

A riff can be any note or chord that you want. The rest is usually repeated to make the pattern. For example, the popular song Smoke on the Water starts with a repeatable riff that drives the song.

Here is what I consider to be the 10 best electric guitar songs. This is only my personal opinion, and you probably have other songs that you love. These songs inspired me when I was learning how to play the guitar. 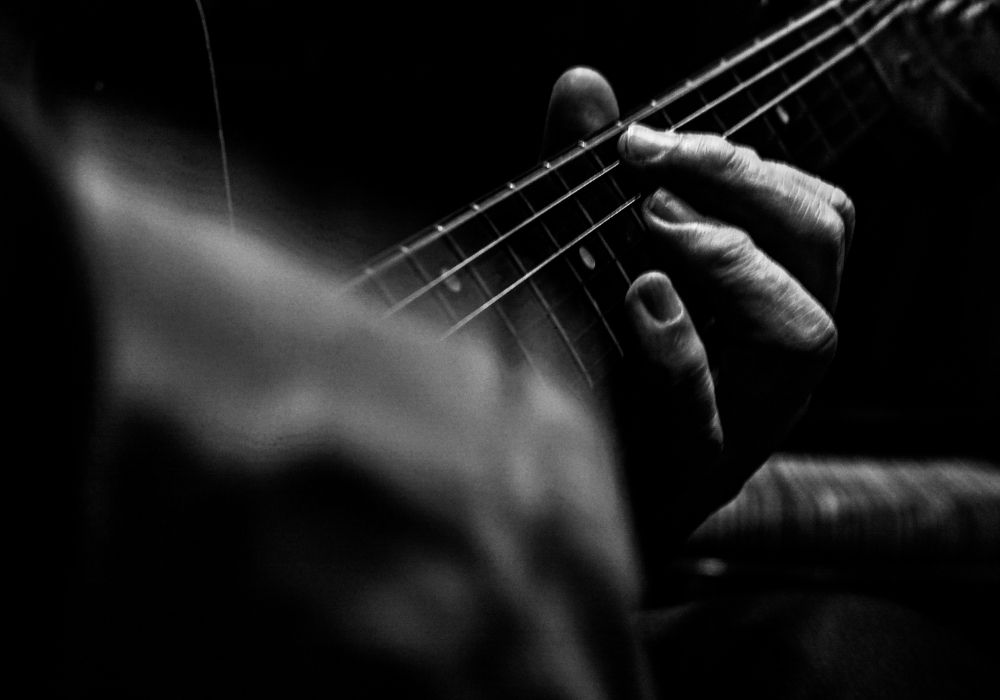 Try some of these songs on your own. Most of them are not all that difficult, and you should pick them up right away. These songs use a combination of riffs, strumming patterns, and chords.

Enter Sandman is one of my favorite heavy metal songs by Metallica. This is a song that I learned while growing up. As a guitar teacher, it was a song that I taught most of my students.

This tune is pretty easy to pick up, and you shouldn’t have much of a problem with it. As long as you have some basic guitar skills, Enter Sandman is a song that almost anyone can learn.

Iron Man by Black Sabbath has an instantly recognizable riff that almost everybody knows. This is a song that’s easy to pick up on electric guitar. This is a simple song that you’ll enjoy playing. It’s one of the first songs that I learned.

The key to this song is to let the chords ring out a little bit and to make sure you use plenty of distortion. Try to learn the whole song if you can because there are several other great riffs in the tune and a simple solo.

You can play Sweet Home Alabama either on an acoustic guitar or an electric. It features a simple riff and chord progression. This is another one of the first songs that I ever learned, and it’s a lot of fun to play.

It’s a great introduction to regular open position chords, and it’s a good workout because it also includes a small single note riff along with the strummed chords. This is an instantly recognizable song for most people.

Another one of the easy songs to learn on electric guitar that you should learn is Whole Lotta Love by Led Zeppelin. This is a simple song to play, as it only contains a short riff and then one chord.

You should play this song with an E power chord at the 7th fret and do a little bit of palm muting on the open E string while you’re playing the chord, which will help you get a feel of the song.

Angus Young is one of my all-time favorite guitar players.  AC/DC songs are not technically complex to play. The thing that makes their music stand out is the rhythm. Back in Black is an example of this.

This tune uses simple open position chords for the main riff. Try to get the timing of the single note riff after the chords because it goes by quickly. You’ll have to listen to it and practice it several times to get the timing down.

Cocaine is one of my favorite songs to play by Eric Clapton. It’s an easy riff, as it’s only two basic chords for the main part of the song. Play the riff slowly until you’re able to get the timing down.

This is not a hard song to master, yet it sounds great even though only a couple of chords are used. It’s also a great song to improvise a solo over, or you can learn the solo note-for-note, the way Eric Clapton plays it.

Day Tripper by The Beatles is an excellent song to learn because it incorporates a couple of riffs. These aren’t all that difficult to play, but they will give you a good lesson in playing in time.

This song is a good example of repeatable riffs. It’s one that all guitarists should learn how to play. This is one of the first songs that I ever learned to play, and it’s one I still enjoy playing to this day.

Wild Thing by The Troggs is another simple song that anyone can learn. You can play it on either an electric guitar or acoustic. It only uses a couple of simple chords, so it’s easy.

You can play this either with power chords or open position chords. It depends on what you want to do with it. If you want to have your own version, try using power chords. Listen to the song to get the timing down.

9. Smoke on the Water – Deep Purple

People play this song the wrong way. It’s actually played using inverted 5ths. This is one of the most popular songs that people learn on the electric guitar. I learned this one myself and also taught it to my students.

You can still play Smoke on the Water using regular power chords, but to play it like it is on the record, you should use the inverted 5th for the song to sound right. Make sure you let the notes ring as you’re playing them.

10. I Can’t Get No (Satisfaction) – The Rolling Stones

I Can’t Get No (Satisfaction) is one of The Rolling Stones’ most popular songs. This song has an excellent riff that anyone can pick up. It’s a great song to learn and an excellent introduction to riff playing.

This is one of the easy songs for electric guitar that you should know. It doesn’t take a lot of effort to learn this song. Play the riff slowly until you get the timing down, as it can be a bit tricky with a couple of slides in it.

There is a wide variety of different electric guitar music styles that you can learn. I only touched upon the basic ones below. 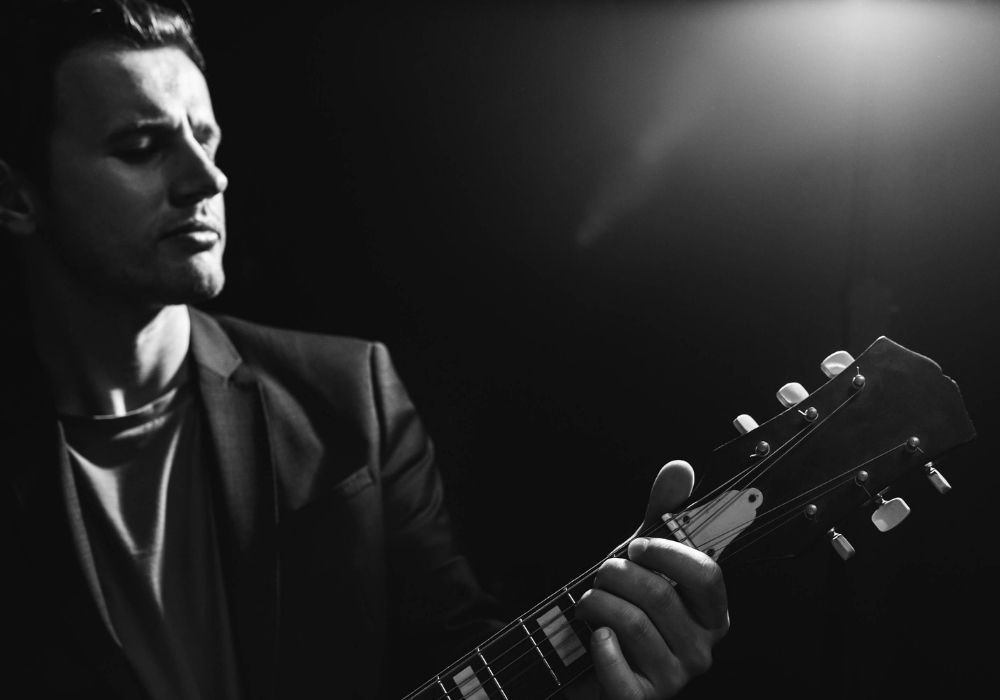 The most popular style of electric guitar music is rock. This style started in the 1950s, and it’s still played today. Bands such as Led Zeppelin, The Rolling Stones, and Pink Floyd are popular in this genre.

Blues electric guitar is probably my favorite style of music. This form of music emphasizes soloing over a 12 or 18 bar progression for the most part. It’s an emotional style of music and one of the first styles many players learn.

When I was younger, I was more into playing heavy metal music. This style of music emphasizes heavy riffs with a lot of distortion. Bands such as Black Sabbath, Metallica, and Iron Maiden defined the early days of this style.

Jazz electric guitar emphasizes a lot of improvisation, and you end up playing a lot of complex chords. This is not really a style for beginners, although you can pick up the basics of jazz initially.

Another popular form of electric guitar is country. There are many popular artists in the country genre, such as Brad Paisley, Keith Urban, and Vince Gill.

I hope you enjoyed this guide to easy songs for electric guitar. All of these songs are quite simple, and you should be able to pick them up right away. They’re fun to play and will inspire you to learn other songs to expand your repertoire.

Please comment, like, and share this article. I look forward to hearing from you. Now, it’s time for you to pick up your electric guitar and learn a new song.